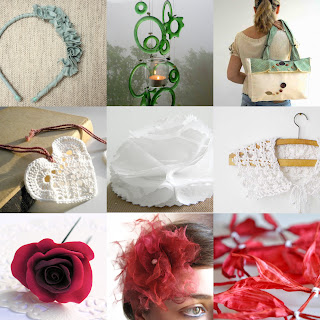 Pirillinca
The Festa della Repubblica is celebrated on the second day of June, and it commemorates the institutional referendum of 1946 when (by universal suffrage) the Italian population was called to decide what form of government (monarchy or republic) to give to the country after World War II and the fall of Fascism.

After 85 years of monarchy, with 12,717,923 votes for and 10,719,284 votes against, Italy became a Republic, and the monarchs of the House of Savoy were deposed and exiled. This is one of the most important Italian public holidays which, like July 14 in France and July 4 in the USA, celebrates the birth of the nation. A grand military parade is held in central Rome.
(Wikipedia)

If you are an EtsyItaliaTeam member you can add your 'Weekly Finds' mosaic here!
Pubblicato da Unknown a 5:27 PM

Email ThisBlogThis!Share to TwitterShare to FacebookShare to Pinterest
Etichette: Etsy Italia Team, we find for you, weekly finds